See a video about the band’s tour to Baghdad!

Jafar Hasan Aboud is Iraq’s perhaps most wellknown and respected composer, whose music moves freely between Classical Arabic Maqam music, Arabic folklore and Western influenced popular music. His songs are great hits to the Iraqi general public, and he has also worked in other Arab countries such as Dubai and Qatar. Furthermore, he is a brilliant oud player. Being forced to escape during the Iraqi war, Jafar ended up as a refugee in Sweden, living there in almost total anonymity, until Pär Moberg stumbled upon him, and was amazed by what he heard. A grant from the Swedish Arts council allowed Jafar to write and perform music together with the band World Mix Orhchestra.  You can watch a video clip from that concert here. They have since also performed with Malmö Opera orchestra. In May 2013, it was possible for Jafar to return to Iraq, and bring with him the newly formed Mazguf Ensemble, to Baghdad for a concert at the National Theatre. The group consisted of some of Denmark’s and Sweden’s finest performers within world music. The concert was broadcasted on all major Iraqi TV channels. It was quite unique for a Western music group to dare to travel to Baghdad in the turmoil then starting to grow in Baghdad.

Nowadays, Mazguf Ensemble is more like a collective, whose members differs from performance to performance. Besides Jafar and Pär Moberg, saxophones, some of the musicians who frequently appear are:

In cooperation with Moriska Paviljongen, the City of Malmö, The Swedish Arts council and Musik i Syd, Mazguf ensemble is running a continuous scene for Music from the Middle East in Malmö: The Baghdad Sessions. The in-house band is Mazuf ensemble and Jafar. For every night, a guest artist is invited. Often this is a local musician with roots from the Middle East, but sometimes also an internationally known artist. The purpose of the club is to offer a platform for the multicultural population of Malmö to meet around a common interest for music from the Middle East, no matter where you were born and raised. Most often the concerts are free, and happen in connection with the After Work of Moriska paviljongen, which means between 5 and 7 PM, if you buy a drink, there’s free food also! Follow us on Facebook!

There are plans for two Baghdad Sessions concerts at Moriska Paviljongen in the autumn of 2019. We will get back shortly with more detailed information.

May 2013: National theatre of Iraq, Baghdad. Watch video clip above!

16th of May 2015. Moriskan Malmö. Premiere for Club Baghdad.

8th of August 2015. Pildammsteatern, Malmö. Premiere for the movie “Stories from Malmö – Sounds of Exile”, which features Jafar as one of the main characters.

A tour, where the film about Jafar and two other immigrated musicians was shown, and an “in house band” accompanied them all in a concert.

12th of May, Global, Copenhagen, Denmark

13th of May, Kulturkvarteret, Kristianstad, Sweden

19th of May 2016: “A New Sweden”, Palladium. Jafar och Nabil was in focus at this concert, which featured several artists that had arrived in Swede as refugees. The concert was recorded by Swedish National Radio.

28th of May 2016: Mini tour of Skåne. We first performed at Skivarp Christian congregation, and then at  Viljan cultural association in Östra Hoby, both times at events trying to bridge the gap between “old” and “new” Swedes.

24th of October 2017 @ Inter Arts Center, Malmö, Sweden. Performance at a conference for international coordinators at the Music Academies of the Nordic countries, where we performed and told about Baghdad Sessions. 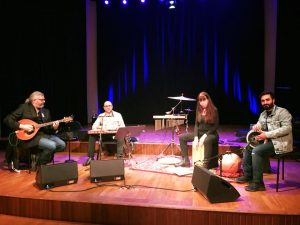 22nd of Jan 2018 @ Palladium, Malmö, Sweden. Performance at a conference for all the producers of the Regional Music Boards of Sweden.

28th of March @ Church of Limhamn. Syrian Easter with Pär & Nabil. The Syrian Orthodox church is one of the oldest in the world. Pär and Nabil played music from the Syrian Easter celebration and some other Syrian music. In cooperation with the congregation of Limhamn.

29th of June 2018 @ Moriska paviljongen.  Mazguf de Luxe! With 10 musicians on stage  where several of our reocurring musicians took part, plus that we took a detour to Afghanistan with our specially invited guests Farhad Ishrat (vocals and harmonium) and Sami Haya (tablas).

19th of Sept 2018 @Eslöv Library. “Arabisk musik- en svensk angelägenhet!”. Lecture about Arabic music by Pär Moberg, with live musik by him together with Nabil Kassis and Emma Lundbeck.

15th of Nov 2018 @ Simrishamns Library. “Arabisk musik- en svensk angelägenhet!”. Lecture about Arabic music by Pär Moberg, with live musik by him together with Nabil Kassis

5th of Dec 2018 @ Löddeköpinge Bibliotek. “Arabisk musik- en svensk angelägenhet!”. Lecture about Arabic music by Pär Moberg, with live musik by him together with Nabil Kassis

4th of April 2019 @Moriska paviljongen. Support concert for Farhad Ishrat in protest against his expulsion from Sweden, where Mazguf Ensemble took part.